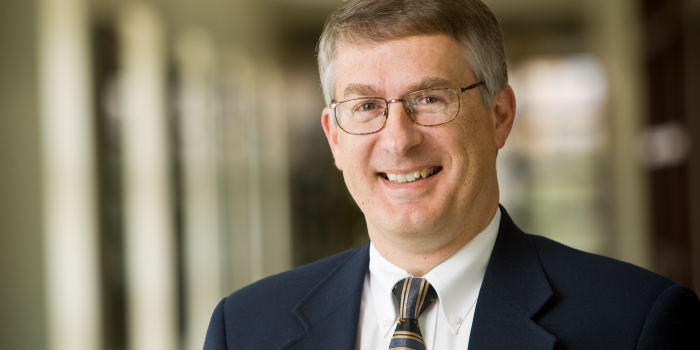 Professor John Korzen, director of the Appellate Advocacy Clinic, has been chosen to speak at the Wake Forest University chapter of  Phi Beta Kappa  2018 ceremony and reception for undergraduates. The event will be held at 5 p.m. on Tuesday, April 10, in the Porter Byrum Welcome Center Auditorium.Each year about 85 students – mostly seniors and some juniors — are inducted into the Wake Forest chapter of Phi Beta Kappa.

“This ceremony is always meaningful, but this year, it will be even more so, because our own John Korzen will be delivering the address to the new inductees and current members,” says Professor Laura Graham (JD ’94), director of the law school’s Legal Analysis, Writing and Research (LAWR) Program and former pre-law adviser for the university.

Professor Korzen’s talk, entitled “Bridges,” will include advice to the new inductees on how to bridge from their past to their future.

Professor Korzen is certified by the North Carolina State Bar Board of Legal Specialization as a specialist in Appellate Practice. He has argued appeals in the Supreme Court of the United States, Fourth Circuit, Eleventh Circuit, Supreme Court of North Carolina, and the Court of Appeals of North Carolina. He has supervised the work of third-year law students in all of those appellate courts and others. Before joining the faculty in 2003, Professor Korzen practiced law for 11 years with Smith Helms Mulliss & Moore in Greensboro, North Carolina, and Anderson, Korzen & Associates in Kernersville, North Carolina. He previously served as a law clerk for the late Sam J. Ervin, III, then Chief Judge of the United States Court of Appeals for the Fourth Circuit. Before attending law school, Professor Korzen taught grades 4 through 7 in the Winston-Salem/Forsyth County School System for six years.