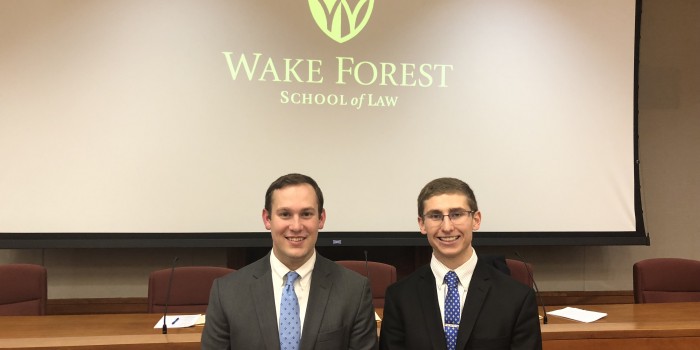 Misner argued in opposition of Tristan Meagher (JD ’20), who was the other finalist in the competition. Meagher is a native of Baltimore, Maryland.

Leading up to the event, which is held each spring for first-year law students, students wrote a brief and argued twice, once “on-brief” and once “off-brief.” After two weeks, 16 students were invited to join Moot Court, and competed in the following week in an elimination tournament leading up to the final round.

The top 16 competitors are invited to join the Moot Court Board. At its discretion, the board also takes honorable mention finishers who demonstrated exceptional writing or oral advocacy skills during the preliminary rounds. The 16 competitors then argue in elimination rounds, with the written brief score counting less in each round. The final competitor becomes the George K. Walker Moot Court champion. A list of the past winners is located on the Moot Court website.

This competition is named after Professor Walker, who founded the intramural moot court competitions at Wake Forest. Professor Walker also teaches Admiralty, Civil Procedure, Conflict of Laws, Federal Jurisdiction, International Law and National Security Law. He joined the Wake Forest law faculty in 1972 and was promoted to professor in 1977.