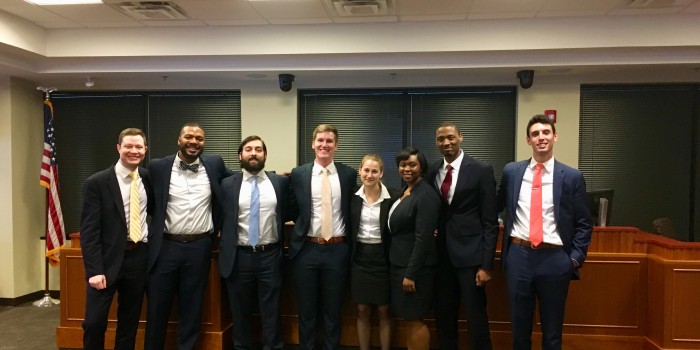 Imagine members of the Wake Forest University football team playing against each other for the national championship title. But in this case the field was a federal courtroom, judges and attorneys were the referees, and it was final arguments instead of touchdowns that decided who was the best in the country.

That’s what happened on April 8, 2018, when the Wake Forest School of Law National Trial Team competitors and coaches continued their record-breaking streak by winning a historic national Trial Team championship at the TYLA National Trial Competition (NTC) in Austin, Texas, with not one, but two, teams competing in the final round.

“The TYLA is the most prestigious competition in the country,” explains Coach Mark Boynton (JD ’97), an attorney with Kilpatrick Townsend & Stockton LLP. “No other law school in our region put both teams in the finals. There is not a way to express the depth and scope of that feat except through the precise execution, sheer force of will, and some good old-fashioned luck that has to come together to pull it off. Winning the national championship is hard enough but to have both teams go to the finals … it’s breathtaking.”

Out of the 300 teams that began this process at regionals, the two teams from Wake Forest ended up as No. 1 and No. 2 in the nation, beating out two former national champions –Kentucky and Michigan law schools.

“As everyone at the championship round acknowledged, the winning team was … Wake Forest,” says Dean Suzanne Reynolds (JD ’77). “We believe that only four other times in the 42-year history of the National Trial Team Competition have two teams from the same school faced each other in the finals.”

This is the fourth year in a row that Wake Forest law school has sent a team from the regional competition to nationals, but it is only the third time in the law school’s history that it has sent two teams. The other two years were 1989 and 1999.

Rice said, “Bringing home Wake Forest’s first national championship in one of the country’s most prestigious trial competitions has been a surreal and euphoric experience.  This is certainly a heartfelt validation of the time, effort, and energy that we have all selflessly poured into this trial team to show everyone that Wake Forest School of Law truly has one of the best trial advocacy programs in the country!”

Boynton, who is the Trial Teams coordinator, also works with Coach Aindrea Pledger (JD ’10), Matt Breeding (JD ’06), coach of the AAJ Trial Team, and Professor Carol Anderson, director of the Litigation Externship Clinic. “Because of what we just accomplished, we have to give Aindrea Pledger a lot of credit, because they would not be where they are without her,” Boynton said.

Boynton, whose team went to the national competition as a 2L but lost in the quarter finals and a year later lost at regionals, added, “The bitterness of those defeats gives you an idea of what this means to us. (North Carolina Superior Court) Judge David Hall wrote to me that this means more than 30 years of being graciously defeated has been swept away. This is a dream come true. Thanks to this championship win, all the other defeats are a little less painful.”

Representatives of the American College of Trial Lawyers are planning a ceremony at which they will present the award to the team, coaches and to the school. “Stay tuned for word of that occasion,” Dean Reynolds added. “In the meantime, join me in congratulating the returning heroes!”

In 2017, Wake Forest law school teams brought home national championships in both the AAJ Trial Competition and the National Moot Court Competition. The TYLA win rounds out the law school’s trifecta in national trial team and moot court/championships.
Stanton added, “Winning the national title for Wake Forest is really special. There is a sense of pride that extends far outside yourself. You feel pride for your school, for your coaches, for your teammates, and for every other person who dedicated time and care to Wake Forest’s Trial Program over the past few decades. A woman approached me at the tournament and said, ‘I thought Wake Forest was somewhere in Pennsylvania, but I sure know who Wake Forest is now.’ And that’s the thing. People are taking notice of who we are and what we do, and to be a part of Wake Forest’s legacy of excellence is humbling.”