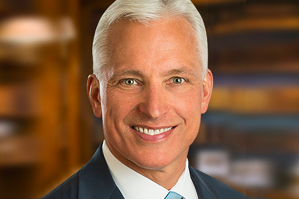 The winners of the 2018 Forsyth County Governor’s Volunteer Awards were announced Wednesday, April 25, 2018, during a breakfast for those nominated. David Daggett (JD ’85), attorney and partner with the law firm Daggett Shuler in Winston-Salem, North Carolina, was proud to accept the 2018 Forsyth County Governor’s Volunteer Service Award in the People’s Choice category.

North Carolina Gov. Roy Cooper has a large focus on and support for volunteers who make a difference. This is the 39th year that these awards have been awarded by the governor of the state of North Carolina. The awards recognize individuals, groups, and businesses who make significant contributions to their communities through volunteerism and community service.  In Forsyth County the awards are managed by HandsOn Northwest North Carolina.

Business owner, attorney, father, and Ironman competitor David Daggett was nominated by the Piedmont Down Syndrome Support Network (PDSSN) for this prestigious award. Daggett has worked with PDSSN for many years. This important nonprofit organization provides support and information to parents of children and adults with Down syndrome in the Piedmont Triad area.

In his awards speech Daggett emphasized the inclusion, acceptance, and love demonstrated by the Down syndrome community.  Moved to tears, Daggett recalled a special interaction and a hug from a little girl in that community.

Dr. McNeil Cronin, President of the PDSSN Board of Directors, stated, “He is driven by an unmatched altruism and a commitment to others. He is a well-known attorney in our community, but I believe that few people truly appreciate the selflessness with which he approaches volunteerism. David has founded and grown the Safe Sober Prom Night campaign in our community—which has touched thousands of youths in our area over the years—and has volunteered his time to countless road races.”

Dr. Cronin continued, “David has donated his name and his platform consistently to promote our ideals of acceptance and inclusion. Specifically, he continuously employs his avenues of social media and traditional media contacts to espouse the mission of the PDSSN. He has also regularly volunteered his media relations to promote the PDSSN organization and events.”

As a 2018 Governor’s Volunteer Service Award recipient David Daggett is grateful for the support from the community and colleagues. He is excited to continue volunteering with organizations like the Piedmont Down Syndrome Support Network. Further, he encouraged all individuals in attendance to be ambassadors of love in our community.

Daggett is known throughout the Triad as a leader in the community not only with his law firm Daggett Shuler, but as the co-founder of the long running Safe Sober Prom Night initiative.

“Making a difference in the lives of our youth, and in the people who need us the most should be the most natural gift of giving. I urge everyone to get involved, pick a charity, an organization, and help make a difference,” Daggett said.