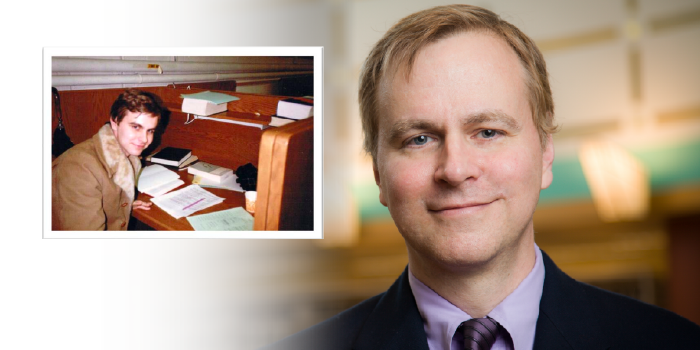 The following profile about Professor Harold Lloyd was originally written by Rebecca Rich, who teaches legal writing at Duke University, and published in the April 2018 issue of Legal Writing Institute (LWI) Lives:

After practicing commercial law for years, both at a firm and then as general counsel to a growing grocery store chain, in 2010, Harold Anthony Lloyd became a legal writing professor—what he refers to as his third career. By any measure, it has been a successful one; he was recently granted a promotion and tenure as a Professor of Legal Analysis and Writing at Wake Forest University School of Law.

Hal is a prolific scholar, writing at the intersection of law and the humanities. He identifies a common thread in his scholarship — that law is too insular and needs to learn from other disciplines, including philosophy, linguistics, and cognitive psychology. His broad teaching and personal interests bridge commercial law and the humanities as well.

In addition to legal writing, Hal teaches commercial leasing, contracts and commercial transactions, classical rhetoric, and meaning and interpretation. He also writes and translates verse. Hal majored in philosophy at Davidson College as an undergraduate and was particularly interested in the philosophy of language. He entered law school thinking that it might be a good stepping stone to a teaching career. But he did not find great intellectual stimulation in the Langdellian method of legal education. Reading redacted appellate cases and learning from law professors with limited practical legal experience seemed to remove much humanity and intellectual rigor from the study of law.

After graduation, Hal began his first career, practicing commercial law with Tuggle, Duggins & Meschan, P.A. He assumed that he would soon return to school for an advanced degree in philosophy. But with more practice experience, he began to see that law was much more profound than what he’d experienced in the more Langdellian law schools of the time. As Hal says, “In practice you see that law’s a complex art that’s also full of humanity, creativity, and intellectual rigor if you do it right, and it becomes fascinating, fulfilling, and fun.”

He has always been more interested in the transactional side of law practice, in part because it tied in with his interest in language. He saw in practice that creating a well-drafted contract was good not only because it benefited people, but because it was a work of art in itself. And as someone interested in literature and verse, he enjoyed understanding the characters in his clients’ stories and knowing his clients’ interests well enough to be able to creatively show them how a deal might be possible even when they thought it wasn’t.

Hal particularly enjoys commercial leasing law. He notes his great satisfaction in putting together a deal that makes everyone happy and then being able to see tangible structures being built and people employed as a result of his and others’ work. Eventually, Hal’s practice at Tuggle Duggins became so focused on one client that it made sense for him to go in house. The Fresh Market is a grocery store chain that now has 170 stores, but it began in Greensboro in the 1980s. In his second career as Vice President and General Counsel, Hal created Fresh Market’s legal department as its first in-house attorney. The role allowed Hal to continue doing the transactional work he enjoyed, but he was also able to see the legal world from a different perspective, as both a lawyer and a client at the same time. Ultimately, Fresh Market went public, which significantly changed the role of the company’s general counsel. Hal used the opportunity to pursue his lifelong interest in teaching, first as an adjunct at Wake Forest, teaching classical rhetoric, commercial leasing, and legal writing. He was eventually hired as a full-time legal writing professor.

Now that Hal is back at law school, his dissatisfaction with the limits of traditional legal education has informed his scholarship, his own approach to teaching, and his vision of what it means to be a successful law professor. In 2015, Hal organized a symposium at Wake Forest called “Revisiting Langdell: Legal Education Reform and the Lawyer’s Craft,” which brought together law professors and practitioners to talk about the inseparability of theory and practice in the law and its implications for legal education.

The related symposium volume of the Wake Forest Law Review has also been published as a book, with Hal’s introduction, “Raising the Bar, Razing Langdell.” Hal chose for the book’s cover William Blake’s rendition of Urizen, Blake’s god of lifeless reason who bears (to Hal at least) an uncanny resemblance to Langdell. Hal’s courses also reflect his belief that successful law teaching must combine theory and practice.

In addition to teaching the first semester LAWR class at Wake Forest that focuses on objective writing, he teaches a transactional section of the third semester LAWR class. In both that class and his commercial leasing class, he does not use a traditional casebook but instead uses a text that’s a combination of a treatise and a variety of actual contracts from SEC filings or other sources.

Hal finds that the students’ writing assignments show much deeper engagement with and understanding of the substantive law that he’s teaching than a traditional exam answer does. Ultimately, in Hal’s view, many more law school classes should be taught like a legal writing class, assessing students’ problem solving skills and understanding of legal concepts through indepth writing assignments.

Consistent with this classroom experience and his belief that successful law teaching must combine theory and practice, Hal believes that it’s important for law professors to have meaningful experience in law practice and to continue to be in touch with the legal profession even after they begin teaching. He envisions professors taking a sabbatical from teaching to return to law practice for a summer or even a year and hopes law schools can leverage alumni connections to make this possible.

Challenging the insularity of the law, Hal also believes that linguistics and semiotics have much to teach lawyers and judges about proper interpretation and construction of both private and public law texts. Hal also believes that modern cognitive psychology reinforces the inseparability of theory and practice in best legal instruction. He has also written about the “cognitive” structure of basic emotions in an effort to draw attention to the relationship between reason and emotion that judges, lawyers and law students often miss, leading to avoidable errors and mental health issues within the bar. Hal contributes to the profession beyond the walls of Wake Forest as well. He has served as a co-editor-in-chief of The Second Draft and as Ethics Chair for the Corporate Counsel Section of the North Carolina Bar Association.

He has also blogged for The Huffington Post. A post he wrote in May 2016 about North Carolina’s infamous House Bill 2, “McCrory’s House Bill 2: A Brief Outline of its Five ‘Parts,’” went viral. He wrote the piece because he felt that reporters weren’t properly explaining what the bill actually covered. His post hyperlinked to the bill itself and asked readers to read it for themselves. Then it briefly explained each part of the bill. The success of the post confirmed Hal’s view that people can understand more than journalists often assume. Hal no longer blogs for The Huffington Post. Instead, you can find him blogging on his Law and Language blog where he shares matters he’s currently exploring, his original verse, and his verse translations. You can contact Hal at lloydha@wfu.edu.