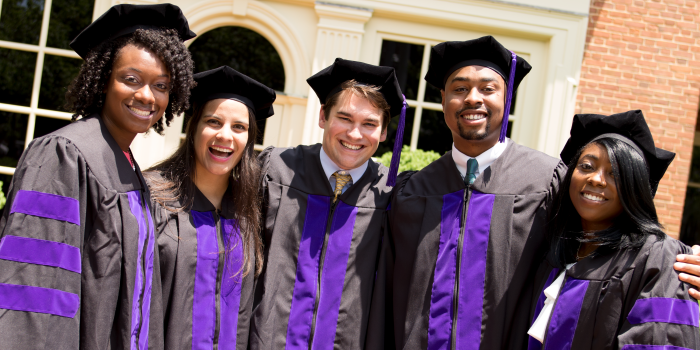 The law school’s 44th annual hooding speakers, Professor Ralph Peeples and Alex Teixeira (JD ’18) were chosen by the Class of 2018 as the faculty and student speakers to address the class at Hooding.

Distinguished Faculty Speaker Professor Peeples, who is retiring this year after 39 years as a professor and an administrator, told the Class of 2018 it’s always better to be lucky than smart.

“The class of 2018 is already smart and you only have to be lucky in spots. The one thing I have known over the years at Wake Forest, for a law school full of bright and ambitious young people, the one thing that doesn’t change is that lifelong friendships are made here. I am confident these students will remain friends after Wake Forest and I am confident because I have seen it again and again. It will happen and I think it’s great. I think that’s what makes Wake Forest different.”

Teixeira thanked the faculty, staff and administrators of the law school along with his classmates and their families for their support over the past three years. “We’ve been through a lot together,” he said.  “Law school has changed us — the way we talk, the way we write and the way we think. But I think we have also stayed the same in some pretty wonderful ways. Since we stepped on this campus we have had each others’ backs and that hasn’t changed. I think this group is special and everyone in this room should be proud of that. Congrats for making this place as enjoyable as it could be over the past three years. If we enter the legal community they way we are leaving here, I am confident we can make a difference.”

You can listen to both speeches at livestream.com/wfu/2018lawhooding.

Dean Suzanne Reynolds (JD ’77) acknowledged it is a bittersweet day because she recognized the retirements of Professors Peeples as well as Professor Miles Foy, Charley Rose,  George Walker and Dean Emeritus Robert K.Walsh.

Executive Associate Dean Jonathan Cardi administered the oath and congratulated the class of 2018, which received a standing ovation from family and friends in the audience.

Associate Dean of Administration and Student Services Ann Gibbs conferred the hoods. Following the placing of the hoods, Dean Reynolds said, “I know it took a village to get you here …” and then thanked the mothers, fathers, long-suffering spouses and all other family members and friends, by asking them to stand as well as the faculty members to be recognized.

Dean Reynolds continued, “Dear Class of 2018, I don’t know if you know this, but a whole lot of people would like to be where you are right now…Applications to law school are up 10 percent nationally and 25 percent here at Wake Forest Law. I think it’s because they have noticed in today’s turbulent times,  the grownup in the room is usually the lawyer … You will be the ones to make sure others have the opportunity to be heard, insist on uncovering facts as they are, not as we want them to be you, will be the ones to bring them to the table and you will be the ones who seek to persuade but never by ridiculing opposing voices. It  doesn’t sound glamorous to be the grownup in the room, but the world is starving for you.

“I have enjoyed doing law school again with you Class of 2018 and I also want to remind you that you are always ours and we are better because of you.”

Diplomas will be distributed in the Worrell Professional Center on Monday, May 21, following Commencement exercises on Hearn Plaza. Thomas Sager (JD ’76), on whom the law school is bestowing a honorary law degree during Commencement, will talk briefly after the Commencement speaker in the Law Commons.

Wake Forest University provides the recording of Commencement at livestream.com/wfu/2018commencement.

Wake Forest Law has been awarded a chapter of the Order of the Coif, a national membership society, honoring the academic excellence of our program, faculty and students. An Order of the Coif chapter at a law school is akin to a Phi Beta Kappa chapter at a college. Student eligibility for membership in the Order of the Coif is restricted to those in the top 10 percent of a graduating class: Catherine Mary Baiocchi, Ashley Erica Barton, Malcolm Sayres Boyd, Mary A. Clayton, Alexandra Marie Fenno, Huston Firment, Michael Henry Herman, Kyle Francis Heuser, Zachary L. McCamey, Daniel Drew McClurg, Patrick Abely O’Connor, Kevin S. Rice, John Allen Riggins, Michael Jacob Stephens and Benjamin Ross Westcott.

•  Andrew Alan Dinwiddie of Waynesville, North Carolina, received the American Bar Association and Bloomberg BNA Award for Excellence in the Study of Labor and Employment Law, which is given to the students who achieve the highest grade in the course.

• Seth Taylor Williford of Wilson, North Carolina, received the Dean’s Award, which is given to honor the extraordinary contributions of a student leader.

• Michael Henry Herman, of Charleston, South Carolina, received the E. McGruder Faris Memorial Award, which is given to the student exhibiting the highest standards of character, leadership and scholarship.

• Katherine Lane Ririe, of Winston-Salem, North Carolina, received the Forsyth County Women Attorneys Association Award, which is presented annually to an outstanding female graduate based upon her academic achievements, leadership, service to community, professionalism and commitment to the legal profession.

• Samantha Poon of Chicago, Illinois, received the Laura J. Gendy Award, an award that was established by alumni, family and friends of Laura J. Gendy (JD’ 00) to provide an annual cash award to a graduating law student who exemplifies integrity, compassion for others and strength of character that were the hallmarks of Gendy, who died in August 2008.

• Zachary L. McCamey (National Team) of Mohawk, Tennessee, and Anna-Bryce Flowe (AAJ Team) of Greenwood, South Carolina, received the Robert Goldberg Award in Trial Advocacy, which honors the memory of Robert Goldberg, a student at the School of Law, who was killed in World War II. It is an annual cash award given to the students showing the highest aptitude and ethics in trial advocacy.

• Mary A. Clayton of Murfreesboro, Tennessee; Zachary L. McCamey of Mohawk, Tennessee; and John Allen Riggins of Little Rock, Arkansas, received the I. Beverly Lake Award, which was established in honor of I. Beverly Lake Sr., professor of law at Wake Forest University, practicing attorney, assistant attorney general of North Carolina 1951-1955, and retired Justice of the North Carolina Supreme Court. An annual cash award is given to the student or students in the law school exhibiting the greatest proficiency in the study of Constitutional Law.

•  Jasmine Hazelton Gregory of Charlottesville, Virginia, received the North Carolina State Bar Student Pro Bono Service Award, which is presented annually to a student who has contributed time and talent to law-related service.

•  Emily Scotton of Julian, North Carolina, received the Smith Anderson Pro Bono Award for Exceptional Service, which is presented annually to a student who is a Pro Bono Honor Society member, whose pro bono service must have resulted in a demonstrated impact on increasing access to legal information to the under-served population.

Professional and candid photos of the Hooding Ceremony and Commencement can be viewed on the law school’s social media accounts.