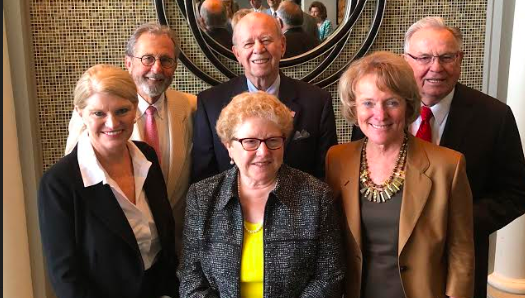 The first woman to lead Wake Forest Law, an assistant chief counsel to the Watergate Committee, a former Charlotte mayor, and a nationally known criminal defense attorney are just four of the nine Wake Forest University alumni inducted into the inaugural North Carolina Lawyers Hall of Fame at a luncheon on June 26, 2018, at the Capital Club in downtown Raleigh.

Reynolds, who recently announced she will step down as the law school’s first woman dean, will remain on the faculty, where she has served for nearly 40 years. She was a principal drafter of statutes that modernized laws regarding alimony, equitable distribution, and adoption.

“For her guidance and the wisdom she has imparted to about 6,000 law students, we welcome Suzanne Reynolds into the Hall of Fame.”

Arrowood is a partner at Parker Poe Adams & Bernstein in Raleigh, where she litigates and arbitrates for businesses, focusing on contract disputes, commercial torts, antitrust, regulation, and corporate governance. A past president of the North Carolina Bar Association (NCBA), she was the first woman in North Carolina to achieve the ranking of Chambers USA Band 1 practitioner in general commercial litigation.

Boyce, who recently retired from Nexsen Pruet, is still active part-time and says he has “one more jury trial left.” His work focused on class-action cases, commercial litigation, and constitutional law, and he has argued before the U.S. Supreme Court. Boyce served as assistant chief counsel to the Watergate Committee, and was the lead investigator whose interviews uncovered President Nixon’s secret taping system in the White House.

David Donovan, an announcer and reporter for the weekly publication, said Boyce was honored, in part, “for the depth of ways he has contributed to his profession.”

Boyce added, “Having happy clients, win or lose, is great. But to be chosen by and among my friends and fellow lawyers is ‘super.’ I am astonished to be here.”

Cheshire is a founding partner at Cheshire Parker Schneider & Bryan, PLLC, in Raleigh, where he practices criminal law. He has handled cases before the U.S. Supreme Court, has been the lead lawyer in cases in which the death row inmates have been exonerated and freed, and was the lead lawyer for the wrongfully accused Duke University lacrosse players. He was the founding chief justice of Wake Forest Law’s moot court program.

Gaskins is managing partner and senior trial lawyer with Everett Gaskins Hancock, LLP, in Raleigh, where he has a diverse civil practice including business law, commercial litigation, administrative law, tax appeals, appellate advocacy, personal injury and wrongful death litigation. He is a member of the NCBA’s General Practice Hall of Fame.

Knox is the senior managing partner of the Knox Law Center in Charlotte and has focused his career in personal injury, workers’ compensation, and condemnation. A former mayor of Charlotte and a former state senator, he has been inducted into the General Practice Hall of Fame by the North Carolina Bar Association.

Sitton is retired as a partner from Smith Moore Leatherwood LLP in Charlotte, where he represented banks, insurance companies, and large corporations in significant commercial litigation. He is past president of the NCBA and is the founding president of BarCARES. When he was 29, he argued and won a pro bono case in front of the U.S. Supreme Court.

Wallace is a partner at Wallace and Graham, PA, in Salisbury, where she focuses on personal injury, wrongful death, defective drug, asbestos, multiple-claimant and mass-torts claims. She also has been honored with the North Carolina Justice Center’s Defender of Justice Award.