Leah Hermiller (JD ’14) is among three members of the Young Lawyers Division of the North Carolina Bar Association (NCBA) to receive awards during the 2018 NCBA Annual Meeting in Wilmington.

The Charles F. Blanchard Young Lawyer of the Year Award, which recognizes young lawyers for their distinguished and meritorious service, is named in honor of Charles Blanchard, founding chair of the YLD who served in 1953-55.

Hermiller was selected for her leadership of the YLD’s inaugural Ugly Sweater 5K. She set lofty goals in terms of registrations and sponsors and she exceeded both of goals. More than 280 individuals registered for the race and over $19,000 was raised in registration fees and sponsorships. Proceeds from the race went to NC LEAP, the North Carolina Bar Foundation’s pro bono program serving low-wealth entrepreneurs.

Hermiller is a graduate of Virginia Tech and Wake Forest University School of Law. She practices with Nichols, Choi & Lee in Raleigh. 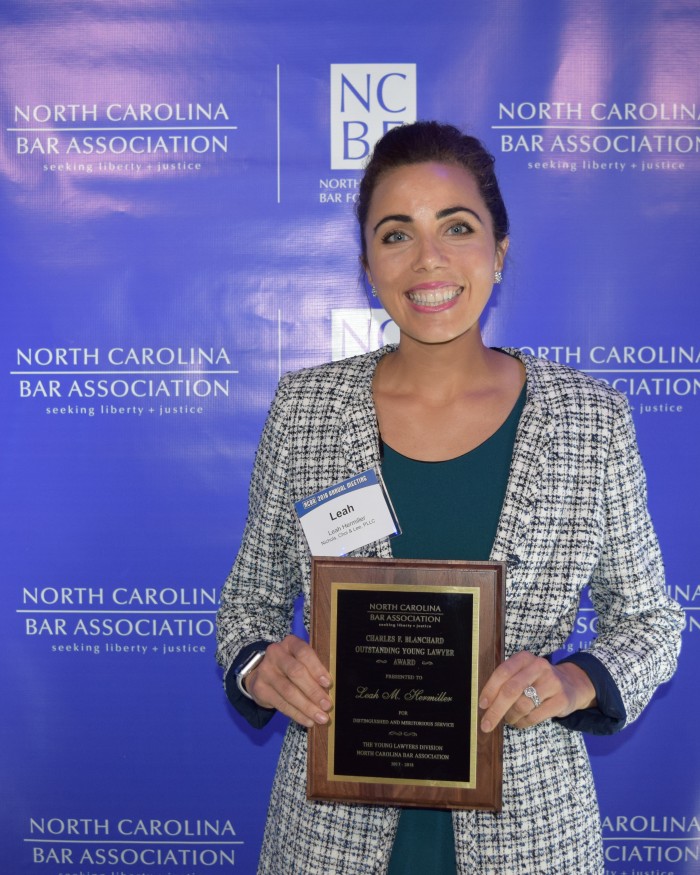 The Robinson O. Everett Professionalism Award was established in 2010 in memory of the former Duke law professor and chief judge of the U.S. Court of Appeals for the Armed Forces who died in 2009.

Bradley was selected for the Everett Professional Award because she embodies the spirit of legal professionalism. She offers fairness, respect, and civility to everyone. She speaks with integrity and honesty. She strives to improve our legal system by giving back to her colleagues in the bar and the public. She is a model of professionalism for others to follow.

Bradley is a graduate of the University of North Carolina School of Law and Campbell Law School. She practices with the Forrest Firm in Asheville.

The Younger Lawyer Pro Bono Service Award recognizes a younger lawyer who has made extraordinary contributions by providing exemplary legal services without a fee to persons of limited means or to charitable groups or organizations.

Applefield Engel became a volunteer with Asheville’s Mountain Area Volunteer Lawyer (MAVL) Program, a partnership between Pisgah Legal Services and the 28th Judicial District Bar, when she entered into legal practice in 2012. Since that time she has taken 29 pro bono case referrals through MAVL (primarily cases to help seniors), contributing almost 200 hours of service. Engel also has provided service and leadership as a member of the NCBA Elder and Special Needs Law Section, through which she volunteers as part of the Hospice Pro Bono Project and recently became a volunteer for the Elder Abuse and Financial Exploitation project.

Engel is a graduate of Appalachian State University and West Virginia University College of Law. She practices with Patla Straus Robinson & Moore in Asheville.