The Hall of Fame was established by the NCBA General Practice Section in 1989. With the addition of the following three inductees, 160 exemplary North Carolina attorneys are now members of the Hall of Fame. 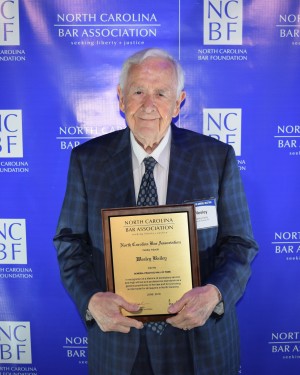 Bailey is the senior partner in Bailey & Thomas of Winston-Salem. He received his undergraduate (1954) and law (1955) degrees from what is now known as Wake Forest University and its School of Law and has practiced in Winston-Salem for 63 years.

Wesley and Joanna Ray Bailey have been married for more than 60 years and have two children: son David Wesley Bailey Jr., who practices law with his father, and daughter Cheryl Bailey Oliver; and five grandchildren.

Additional civic and community activities include the Winston-Salem Chamber of Commerce, Old Hickory Boy Scout Council, Winston-Salem Optimist Club (soccer program chair) and Forsyth Medical Center Foundation. He is a former solicitor of the Forsyth County Municipal Court and most amazingly for 62 years has been a member of the Moravian Easter Band.

His diversity of civic contributions is exceeded only by the vast array of criminal and civil matters that Bailey has tried throughout his career, including capital cases as privately retained and court-appointed counsel, zoning cases, business disputes, will caveats, personal injury cases, and countless real estate transactions. 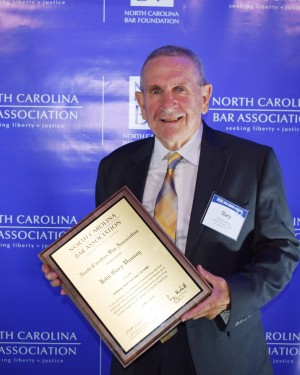 Vannoy of Vannoy, Colvard, Triplett & Vannoy of North Wilkesboro has enjoyed a remarkable career of more than 50 years. He earned his undergraduate education from Mars Hill College and Wake Forest University (1962) and is a 1964 graduate of Wake Forest University School of Law. Early on he served as a county court judge in Wilkes County, setting the tone for a career devoted to community service and leadership.

Vannoy has served as town attorney for North Wilkesboro since 2008. He is also a former State Bar councilor and past president of the Wilkes County Bar Association and the 23rd Judicial District Bar. He is especially revered for lending guidance to other lawyers who have experienced difficulty navigating the criminal courts of N.C. Vannoy has devoted approximately 90 percent of his practice to litigation, earning him the respect of countless judges, many of who supported his nomination.

Vannoy is also highly respected for his commitment to local organizations, clubs, events and youth sports teams. And he has contributed to the betterment of his community through his service as a local businessman in the development of real property and as a longtime bank director.

Robert Johnson, mayor of North Wilkesboro, commended Vannoy for serving the town “with the utmost integrity and efficiency.” Vannoy, he added, “has always been a person who cares about others and providing legal services to those in need of sound legal advice, and he did that long before he ever became town attorney.”

Nancy Black Norelli of Norelli Savage Law in Charlotte is a former District Court judge (2000-08). She previously operated Nancy Black Norelli, PLLC, which was acquired by McGuireWoods when she became a judge, and is a former partner in charge of estate planning and administration at Kennedy, Covington, Lobdell & Hickman (now K&L Gates).

Community spirit permeates every aspect of her legal career, dating back to her role in launching the Volunteer Lawyers Program in Mecklenburg County and chairing that effort for several years. She has since served on the NCBA Legal Services Planning Committee (chair 1987-90), the board of Legal Services of Southern Piedmont (now Charlotte Center for Legal Advocacy) and the Chief Justice’s Access to Justice Commission. Norelli has served on the N.C. State Bar Council since 2009, is a past chair of the NCBA Judicial Performance Evaluation Committee and past president of the Mecklenburg County Bar, and a former member of the NCBA Board of Governors.

Additional civic and community activities include co-chairing the Mecklenburg County Courthouse Dedication Committee, chair of the Charlotte Merchants Foundation, and longtime service on the American Cancer Society Advisory Board. She has served as an elder and deacon for First Presbyterian Church of Charlotte and co-chaired the Inspired Cooking cookbook initiative that raised $82,000 for hunger ministries in Charlotte.

Norelli is a graduate of Wellesley College (1972) and Northeastern University School of Law (1976). She is married to Ronald A. Norelli and has three children: Andrew, Margaret and Lee.