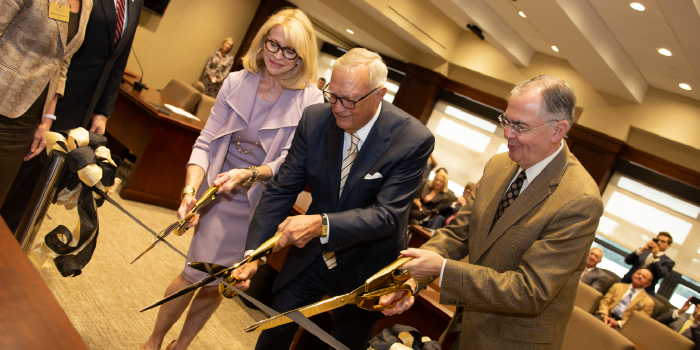 Among other accomplishments, Daughtry led the state to adopt legislation that provided nonpartisan judicial elections for state appellate judges. He also played a pivotal role in passing Senate Bill 448, which profoundly improved the functioning of the state’s appellate courts by reducing the number of times appellate judges and justices would have to stand for election.

“On each occasion, he was the architect,” said Chief Justice of the Supreme Court of North Carolina Mark Martin at the courtroom dedication ceremony. “It was his vision and his leadership that led to vital changes and improvements in the administration of justice in our state. These changes preserve and enhance the integrity of our judiciary — they strengthen the rule of law.”

Daughtry served as a Judge Advocate General with the United States Air Force from 1966 to 1969 and returned to his home in Smithfield to start the law firm that is now Daughtry Woodard Lawrence and Starling. His political career began in 1989 when he was elected to the North Carolina Senate. He later expanded his service to the North Carolina House of Representatives, taking on the roles of House Majority Leader and House Minority Leader.

With more than 25 years of service to the state’s legislative branch, Daughtry recognizes the importance of business courts in the state.

“Pressure has been placed on our court system to resolve issues that should be resolved by our legislative branch or our executive branch,” said Daughtry in his dedication remarks. “And that’s why this court is so important. The business courts have leading edge technology, innovations, but most of all, these courts have very well-qualified judges who are independent. And when a plaintiff or defendant comes to this court, they know they will get fair treatment.”

Wake Forest School of Law is one of few law schools in the nation to have a working business court in residence. This partnership has allowed current students to enrich their law school experience by attending court proceedings steps away from the classroom.

“Legal education here is known for its excellence in experiential learning and service to our greater community,” said Wake Forest University President Nathan O. Hatch. “By housing the business court here, we not only live up to our values as an institution, but provide even greater opportunity for the next generation of citizen lawyers to learn from current leaders in the field.”

The law school’s Dean Suzanne Reynolds (JD ’77) concluded the ceremony, addressing Daughtry, “I know that if you thought legislation was good for the people of our state, you’d worked tirelessly behind the scenes to secure passage, working quietly and effectively on both sides of the aisle. May this courtroom, with your name, inspire other public servants to rise above partisanship and, like you, work selflessly for the public good.”