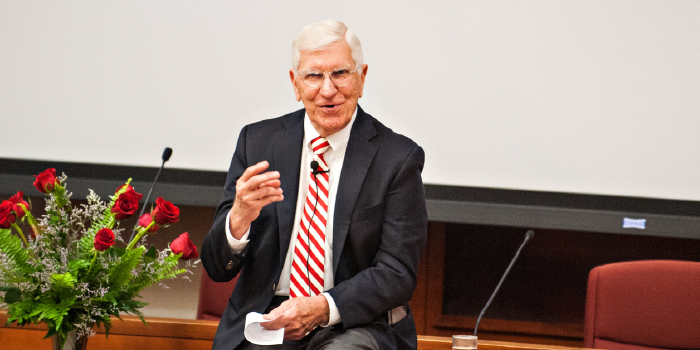 (Winston-Salem, N.C., Jan. 14, 2019) — Wake Forest University will award Professor Emeritus Charley Rose with the Medallion of Merit at the 2019 Founders’ Day Convocation. The award, which is the University’s highest honor, will recognize his achievements and contributions as a teacher, mentor, and colleague to the law school and greater university.

In a statement to alumni, students, faculty, and staff, Dean Suzanne Reynolds (JD ’77), who has been both a student and colleague to Professor Rose, expressed her excitement for the recognition.

“How thrilled I am to share with you that the University will bestow its highest honor, the Medallion of Merit, on our very own Charley Rose,” said Dean Reynolds. “On several occasions, I have called Charley ‘Mr. Wake Forest Law School’ and no one has ever doubted that the title belonged to him.”

Professor Rose, who dedicated 44 years of service to Wake Forest School of Law, is an eight-time winner of the student-voted Excellence in Teaching Award and a winner of the Joseph Branch Award for Excellence in Teaching. He began the “Conversation With” speaker series program, which continues to bring role models of the legal profession to the law school for informal discussions with current law students. He also served as an adviser to Wake Forest’s National Moot Court Team for over 20 years, helping the law school win the 1986 national championship title.

Professor Rose gave his last lecture in April 2018, which can still be viewed at wfu.law/la2. His role as professor emeritus began July 1, 2018.

The 2019 Founders’ Day Convocation will begin at 4 p.m. on Thursday, February 21, 2019 at Wait Chapel. For more details, go to convocation.wfu.edu.

Wake Forest School of Law has committed to keeping legal education small and personable for over 35 years. Established in 1894, the law school is located in Winston-Salem, N.C. Wake Forest law school is ranked No. 32 in the nation and offers several degrees, which include the Juris Doctor (JD) with dual and concurrent degree options, an online Master of Studies in Law (MSL), a Master of Laws (LL.M.), and the Doctor of Juridical Science (SJD). Learn more about Wake Forest School of Law at www.law.wfu.edu.

Correction: The original announcement stated that there were only two former law honorees of Wake Forest’s Medallion of Merit, which was incorrect. Leon H. Corbett Jr. (’59, JD ’61), Murray C. Greason (’59, JD ’62), and former Wake Forest University Chaplain Edgar D. “Ed” Christman (’50, JD ’53) were also recipients of the award, all of whom hold a juris doctorate degree from Wake Forest School of Law. This press release has been updated for accuracy.