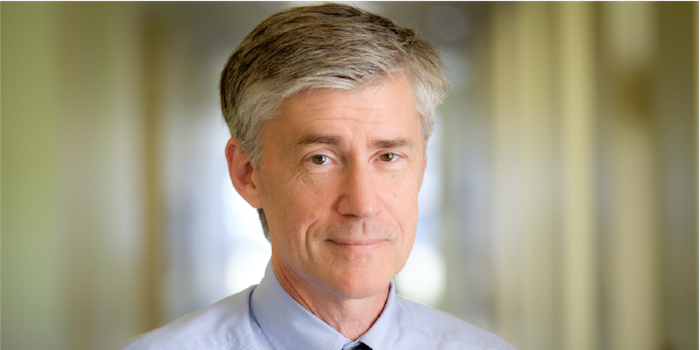 (Winston-Salem, N.C., Jan. 28, 2019) — John Knox, professor of international law and former Special Rapporteur on the issue of human rights and the environment, has been named the 2019 recipient of the Joseph Branch Excellence in Teaching Award.

“Whether he’s teaching Property, International Human Rights, Environmental Law, etc., John’s students consistently describe him as a fantastic teacher,” said Dean Reynolds. “They respect his high standards for their performance as well as his own and enjoy his wonderful sense of humor. Like all of us, they appreciate that despite being incredibly accomplished, he remains humble and respectful of everyone with whom he interacts.”

Knox, who began teaching at Wake Forest School of Law in 2006, was appointed by the United Nations Human Rights Council (UNHRC) in 2012 to serve as its first Independent Expert on the issue of human rights and its relationship to the enjoyment of a sustainable, clean, and safe environment. His service was extended another three years when he was appointed to be UNHRC’s first-ever Special Rapporteur on human rights and the environment.

In this role, Knox continued to research and consult on behalf of the United Nations (U.N.) as well as write annual reports on topics such as climate change, biodiversity, and the connection between children’s rights and the environment. This research took him to places like Madagascar, Uruguay, and Mongolia. In his final report as Special Rapporteur, he called for the global recognition to the human right to a healthy environment.

The Joseph Branch Excellence in Teaching Award was established in 1985 to honor Wake Forest Alumnus Joseph Branch (JD ’38, LLD ’83) upon his retirement from the North Carolina Supreme Court for his embodiment of the humanistic and student-centered approach to legal education that remains characteristic of Wake Forest Law. Recipients are chosen from the School of Law faculty on the basis of outstanding teaching and service to the legal profession.

Knox will be honored at Wake Forest University’s 2019 Founders’ Day Convocation, which will be held at 4 p.m. on Thursday, Feb. 21, in Wait Chapel. Wake Forest Law Professor Emeritus Charley Rose will also receive the Medallion of Merit during this ceremony.