Our Announcements | Comments Off 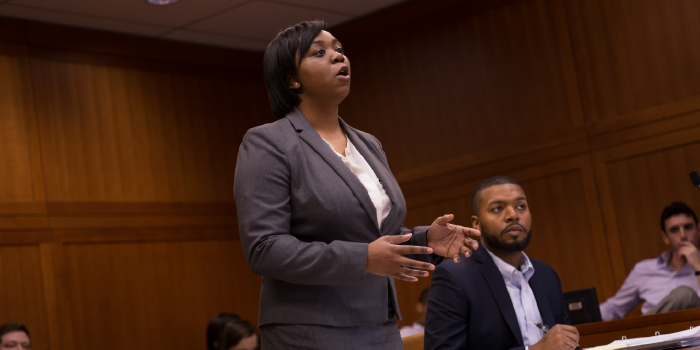 (Winston-Salem, N.C., Feb. 7, 2019) — The 2018 National Trial Team champions returned from the regional competition of the 2019 TYLA National Trial Competition (NTC) with a collection of individual recognitions and accolades—some of which serve as an unprecedented milestone in Wake Forest history.

Team Monster had three hard-fought trials and ended the preliminary rounds with one win and two losses, but nevertheless finished the competition with the second-highest point total and third highest point differential among all 20 teams. Stanton received the Outstanding Advocate Award with the 4th highest score total of all competitors.

Team Mamma Bear finished the preliminary round with an undefeated record, allowing them to enter the next round as the No. 1 seed. The squad later faced William & Mary and prevailed in a 3-2 decision. Rice and Lamonte would end up defending against the home team, South Carolina, but would end up losing in a 2-1 decision. For the second year in-a-row, Rice was named the Best Overall Advocate of the tournament.

“We should be proud of these students and their teammates as they have accomplished historic and unprecedented achievements for our School and our University,” said Coach Boynton. “It is always my privilege to coach these students.”

Stanton and Rice, with their multiple campaigns at the NTC, their championship experience at the Tournament of Champions (TOC), and numerous individual awards, are now two of the most decorated student trial advocates in the nation and in school history.

Lamonte, who was undefeated in competition for eleven straight trial competitions, will also graduate from Wake Forest as a distinguished trial advocate.