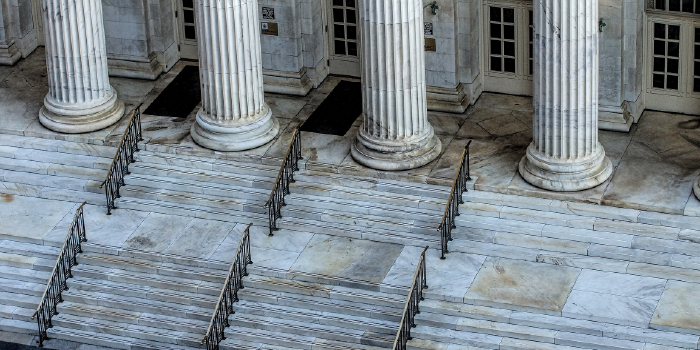 While most third-year law students were completing and submitting their final assignments, Adam McCoy (JD ’19) was presenting an oral argument to a panel of judges at the Fourth U.S. Circuit Court of Appeals in Richmond, VA.

Joining McCoy in Richmond were Hanna Monson (JD ’19), who co-authored the two briefs filed by the clinic; Ashley Bouchez (JD ’19), who helped McCoy prepare for the oral argument; Will Reingold (JD ’19), a member of the clinic; and Professor John Korzen (BA ’81, JD ’91), the clinic’s director. 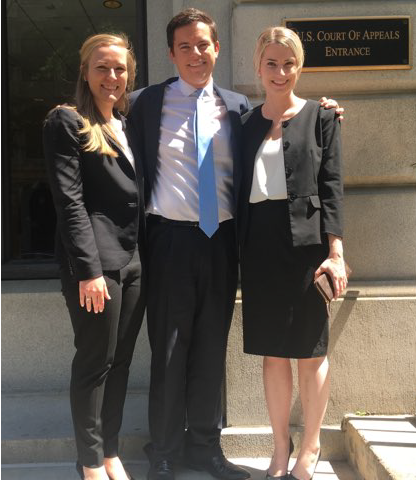 The three-judge panel consisted of presiding Judge Diana Motz of Maryland, Judge James Wynn of North Carolina, and Judge Julius Richardson of South Carolina. The appeal presents an issue on which there is a circuit split: whether, under the Prisoner Litigation Reform Act, an indigent, incarcerated plaintiff may appeal a third dismissal of a complaint for failure to state a claim without pre-paying the filing fee. While the Fourth Circuit previously held that the answer is yes, that precedent may have been called into question by the Supreme Court’s interpretation of the same statutory provision in Coleman v. Tollefson.

“Adam’s argument was outstanding,” said Professor Korzen.  “He was fully prepared and answered numerous questions in a very clear, persuasive way. Hanna and Ashley were a huge help, too.”

The argument capped an eventful school year for the Appellate Advocacy Clinic that included two trips to the Supreme Court to hear arguments in cases in which the clinic had filed amicus briefs, a Fourth Circuit oral argument by Raquel Macgregor (JD ’19), and numerous other briefs in federal and state appellate courts.

Listen to the oral argument at wfu.law/5e2