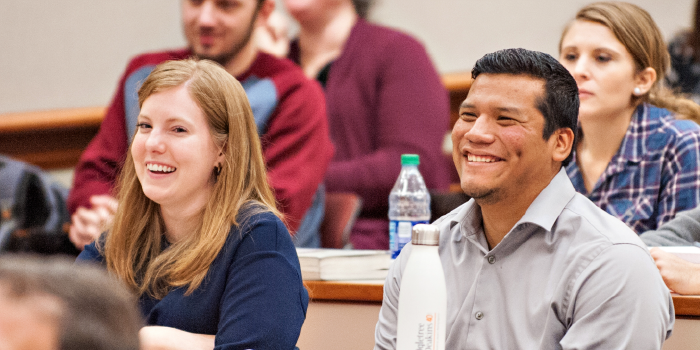 The “Conversation With” Series, which began in 1999 by Professor Emeritus Charley Rose, is an annual program that invites professional role models to share candid stories about their careers and the law with the Wake Forest community.

All “Conversation With” events are free and open to the public.

Dean Jane Aiken will join the “Conversation With” Committee for their fall discussion at noon on Wednesday, Sept. 4, 2019, in the Worrell Professional Center, Room 1312. Third-year law student Agustin Martinez (JD ’20) will moderate the event, which will be available to watch via livestream.

Aiken joined the Wake Forest community as dean of the School of Law, beginning July 1, 2019. She comes from Georgetown Law, where she has been a professor and administrator since 2007.

As a leading scholar in clinical pedagogy, she founded Georgetown’s Community Justice Project, which enabled students to represent clients in cases involving questions of justice where remedies are often transactional, policy-based, or require extraordinary measures for adjudication. In addition to teaching Evidence and Torts, she has also taught Motherhood and the Law as well as the Law of Extradition. In 2018, she chaired the University Task Force on Gender Equity at Georgetown.

Aiken earned an LLM from Georgetown, a JD from New York University as a Root-Tilden Scholar, and a BA from Hollins College.

Kimberly Stevens (JD ’92), who is a capital resource counsel attorney, will join the “Conversation With” Committee for their spring discussion at noon on Wednesday, Feb. 5, 2019, in the Worrell Professional Center, Room 1312.

With nearly 25 years of practice, Stevens has handled more than 40 capital trial cases. She has directly represented approximately 45 men and women facing the death penalty in state and federal court, according to her profile on the Federal Death Penalty Resource Counsel Project website. In 2017, Stevens was one of just two capital resource attorneys for all federal capital trial cases across the U.S.

In addition to her capital defense work, Stevens also provides advice and training to trial teams. She also taught trial advocacy as an adjunct professor at Wake Forest Law and coached the School’s American Association for Justice (AAJ) Trial Team for approximately 10 years.

She received the Charles Becton Teaching Award from the North Carolina Advocates for Justice in 2015. In 2009, the Fair Trial Initiative in Durham, North Carolina, awarded her with the J. Kirk Osborn award for “providing excellent representation to indigent men and women facing the death penalty and for her work in mentoring young lawyers throughout North Carolina.”