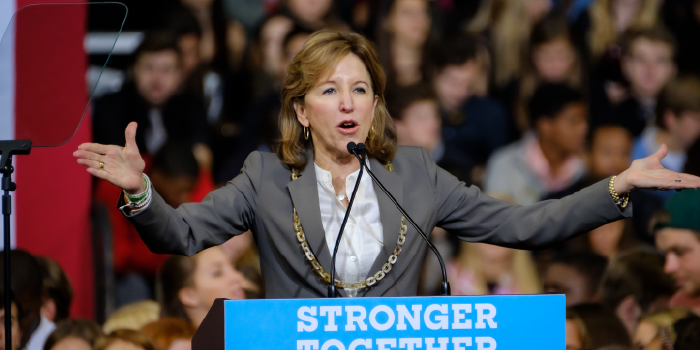 Hagan died in her sleep in her Greensboro home, according to the Charlotte Observer. Her death was caused by Powassan virus. Spread from ticks to humans, the virus is rare, and causes brain inflammation.

Hagan earned her JD degree at Wake Forest University School of Law. It’s where she met her husband, Chip Hagan (JD ’77). Dean Emerita Suzanne Reynolds (JD ’77), remembers Hagan fondly. “Kay was the most giving of persons – to her family, her community, and all the people of North Carolina, especially those who needed a champion. No one brought more passion, more principles, more devotion to public service than Kay Hagan. The state and nation have lost a model of what it means to be a public servant, but Chip and family’s loss is so much more,” she said.

“Kay was a hard-working and fine law student at Wake,” said Professor Emeritus Charley Rose. “She was a well-respected attorney. Her greatest contribution was her success as a United States Senator. She advanced the role of women in the profession and North Carolina. She will be missed by all who knew her.”

Hagan won a seat in the North Carolina Senate in 1998. Ten years later, Hagan was elected to the U.S. Senate and served one term. During that time, she was a champion of the Affordable Care Act, worked to limit payday lending, and fought to release documents pertaining to toxic water at Camp Lejeune. Two years after leaving the Senate, Hagan contracted the tickborne illness.

Last Tuesday, Hagan accompanied her husband to the launch of a nonprofit arts campaign in Greensboro. The pair had agreed to serve as honorary campaign co-chairs. “We already miss her humor and spirit as the hub of our family, a role she loved more than anything,” a statement from her family reads, according to the Associated Press. “Nobody could light up a room and make people feel welcome like Kay.”

She is survived by her husband Chip, and three children: Jeannette Hagan, Tilden Hagan, and Carrie Hagan Stewart.