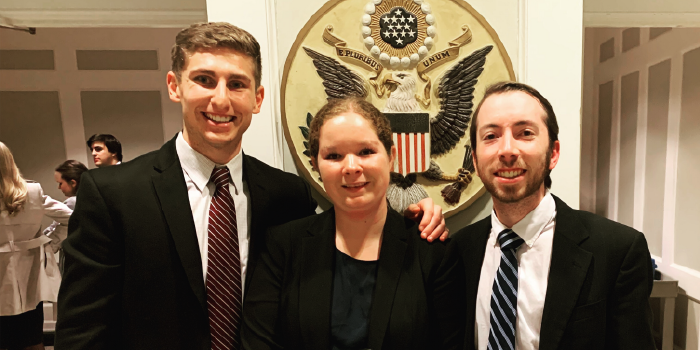 (Winston-Salem, N.C., Nov. 18, 2019) — The Wake Forest National Moot Court Team ended its 2019-2020 campaign during the semi-final rounds of the National Moot Court Competition’s Region IV Tournament. Wake Forest was one of only four teams to go undefeated during the preliminary rounds of the tournament with the team of third-year law students placing among the top four teams for Best Brief score.

Wake Forest entered the elimination round as the No. 4 seed. The team remained undefeated after their third victory, which allowed them to advance to the semifinal round where they competed against the No. 1 seed of the tournament. During this round, the Demon Deacons argued on behalf of Respondent United States and were narrowly defeated by a single point, eliminating them from the National Moot Court Competition.

“The team did an outstanding job both on the brief and in preparing for the oral arguments,” says Korzen. “This year’s problem was especially challenging for the Respondent United States, which had to argue both that an undocumented alien had failed to exhaust an administrative challenge to his expedited deportation and that he had no First Amendment right to speech regarding a pending immigration bill.”

The Wake Forest Moot Court team has captured two national championships — one in 1986 and another in 2017.

Integrating oral advocacy experience into the curriculum has been a long-held tradition of the School of Law, one that distinguishes Wake Forest as the only law school to win the AAJ Student Trial Advocacy Competition, the National Moot Court Competition, the American College of Trial Lawyers National Trial Competition, and the Tournament of Champions in consecutive years.