Wake Forest remains among the nation’s best for trial advocacy 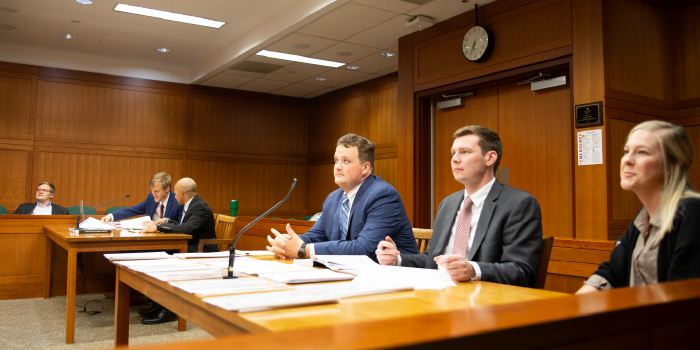 (Winston-Salem, N.C., Nov. 4, 2019) — The Wake Forest National Trial Team ended its 2019 campaign as one of the top teams in the country after another historical performance at the 2019 National Board of Trial Advocacy (NBTA) Tournament of Champions (TOC).

The competition was hosted by American University and held at E. Barrett Prettyman Federal District Courthouse in Washington, D.C. The event is an invitation-only trial advocacy tournament that selects the sixteen highest ranked trial advocacy programs in the country to compete for the champion’s title.

The problem for this year’s tournament was a real criminal case that involved the death of a 17-month old child caused by Fentanyl poisoning, resulting in charges of welfare endangerment and involuntary manslaughter against the child’s mother. Her live-in boyfriend, a convicted Fentanyl and heroin dealer acting as a confidential informant for the police, testified for the prosecution while her neighbor, the executive director of Positive Parenting Alliance, testified for the defense.

Every team tries the case four times during the four preliminary rounds with each team prosecuting and defending twice. Kunkel and Jester prosecuted while Harris and Shortt defended. Other coaches praised Wake Forest for their preparation, execution, acumen, and professionalism, according to Boynton.

Wake Forest ended the final preliminary round with a win over the University of California Berkeley, where Kunkel was unanimously named Best Advocate by the judges. The Demon Deacons ended the preliminary rounds with a 3-1 record, tying with Drexel, Loyola-Chicago, Harvard, Syracuse, Akron and Berkeley, but fell short of capturing enough ballots to move on to the final four round.

“Regardless of trophies, the admiration and respect of worthy adversaries outstrips all tokens of victory,” says Boynton. “These four students steadfastly and resoundingly honored and continued Wake Forest’s traditions of trial advocacy excellence as a blend of fierce preparation with unwavering integrity and professionalism. I am so proud of them, and feel privileged to coach them.”

Because the Demon Deacons won the 2018 NBTA TOC, defeating the University of Akron School of Law in the finals, Wake Forest University will host the 2020 competition.

Wake Forest is ranked No. 1 in North Carolina and among the top three schools nationally for Trial Competition Performance since 2016, according to the 2019 Fordham Law rankings. Since 2017, Wake Forest School of Law has brought home four national championships with the National Trial Team most recently winning the 2018 TOC. Wake Forest is the only law school to win the AAJ Student Trial Advocacy Competition, the National Moot Court Competition, the American College of Trial Lawyers National Trial Competition, and the Tournament of Champions in consecutive years.