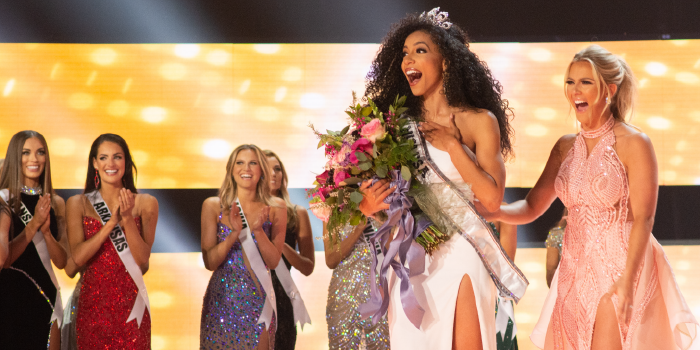 “I have five siblings, and when I was younger, I was always the one in the family representing my other siblings,” said Cheslie Kryst (JD/MBA ’17) during a phone interview just days after winning the 2019 Miss USA title in Reno, Nevada. “I was always speaking for my siblings, always speaking on behalf of my friends, and they always trusted me to represent them. So, it seemed sort of a natural progression to go from that to law school.”

Her decision came after earning her undergraduate degree in business administration with a double major in marketing and human resources management while running Division I track at the University of South Carolina. She says visiting Wake Forest on Accepted Students Day sealed the deal for her.

“Wake Forest shaped who I was and am as an attorney, and as a person,” Kryst said. “I just grew so much and learned so much about me, about the legal profession, and about what I wanted out of my career, at Wake Forest.”

During her time at the School of Law, Kryst experienced just about everything. She participated in Moot Court, was a prominent member of the national championship-winning AAJ Trial Team, served as president of the Sports and Entertainment Law Society, and was the national parliamentarian for the school’s chapter of the National Black Law Students Association (BLSA). “Seriously, I could go on for days talking about my experience at Wake Forest,” she said.

As an associate at Poyner Spruill in Charlotte, N.C., Kryst also performs pro bono work with prison inmates. Her passion for this work was inspired by a speaker at the School of Law. Bryan Stevenson, the author of “Just Mercy,” is also a founder of the Equal Justice Initiative, a legal practice dedicated to defending the poor and wrongly imprisoned.

“Dean Ann Gibbs said, ‘You need to read his book. That’s something you should do after the bar,’” Kryst said. “So after passing the bar and before starting work, I read his book, and it had a profound impact on me.”

“He talks a lot about some of the injustice in the justice system, and how the justice system tends to negatively affect minorities and people who can’t afford attorneys more acutely than it affects others. Because of his book, and because of my stepdad—he’s also an attorney who worked a lot with President Obama’s clemency project—because of those influences on my life, I decided I needed to help. Being an attorney, I am empowered to help, and I have the means to help, so that is what I do.”

Another influence on Kryst’s career? Her mother, who held the title of Mrs. North Carolina US in 2002. According to a 2019 Charlotte Observer article, Kryst said she learned the power of the pageant platform as a grade school student. “I remember seeing people paying attention to every word my mom said,” the story quotes Kryst.

When it was her time for the interview segment at the Miss USA pageant, Kryst’s answer on the #MeToo and #TimesUp movements gained approval in the news and on social media.

During her year-long reign as Miss USA, Kryst plans to continue her advocacy for Dress for Success, an international organization empowering women to achieve economic independence through a network of support, professional attire, and development. Kryst worked with the Charlotte chapter before becoming Miss North Carolina USA. She has also relocated to New York City to prepare for the Miss Universe competition. “I’ll get to design my national costume and also my evening gown for the competition,” she said. I’m thrilled to represent the USA at the Miss Universe competition and excited to start prepping.”