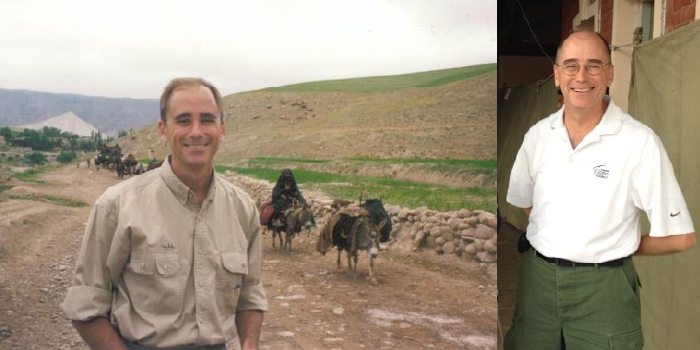 For Bobby Ray Gordon (JD ’86), legal education has been the doorway to a career built on decades of service and humanitarian aid.

This doorway, painted with the colors of Mother So Dear, has allowed Gordon to take on numerous international positions, many of which have tasked him to defend the rights — and even the lives — of people all over the world.

“For me, the most memorable and satisfying experiences have been the moments where I have been able to use my legal education and legal skills to help protect the rights, and sometimes lives, of refugees and internally displaced persons (IDP),” says Gordon, who now calls Waipahu, Hawaii, home.

Although he entered the legal profession as a litigator in 1986, Gordon’s career has evolved into a collection of more than 15 years of experience in international counsel, humanitarian aid, and disaster response. He took a slight pivot from litigation in 1991 when he joined the Peace Corps and the United Nations (U.N.) as a volunteer legal consultant for the U.N. High Commissioner for Refugees (UNHCR), a role that took him to Hong Kong. It was during this deployment that he met Aida, the woman who would become his wife for more than 22 years.

Gordon went back to practicing litigation after his term with the Peace Corps ended, but he returned to global refugee issues in 2002 when he took on the role of refugee protection officer for the International Rescue Committee. He was assigned to UNHCR offices in Sri Lanka, western Afghanistan, and Sudan.

“To be able to help people in dire straits return to their homes or to begin a new life in a new country with safety and dignity, makes all of the challenges worthwhile,” Gordon explains. “In each of my deployments, there was at least one case where I felt I actually made a difference in someone’s life.”

Gordon continues to contribute to global humanitarian efforts as a multinational planner for the U.S. Pacific Command, a position that requires possible deployment for U.S. foreign disaster response and humanitarian assistance operations. He was most recently deployed in 2015 for the U.S. Pacific Command’s Nepal Earthquake Response, which is otherwise known as Operation Sahayogi Haat or Operation “Helping Hand.”

Gordon also travels throughout Asia and the Pacific to educate and prepare U.S. and regional military officers on how to support civilian-led disaster response and humanitarian operations under internationally recognized guidelines.

Looking back on his career, Gordon acknowledges that his Wake Forest experience and background in litigation built a strong foundation for the various international positions he has taken on during his lifetime.

“My Wake Forest education and years of litigation practice enabled me to effectively interview asylum seekers, and critically analyze their claims of persecution,” Gordon says. “I was also able to effectively research and defend refugees, internally displaced persons, and stateless persons against abuses of their human rights. My legal education now enables me to analyze guidelines on disaster response, humanitarian assistance, and protection of civilians.”

“I was required to have a Hawaii Bar member vouch for me,” Gordon recalls. “Professor George Walker introduced me to (retired) Major Gen. Ray Starling, Jr. (JD ’75) and his wife, Pamela T. Garrison (BA ’75), who were Hawaii Bar members living in North Carolina – they vouched for me, enabling me to sit for the Bar.”