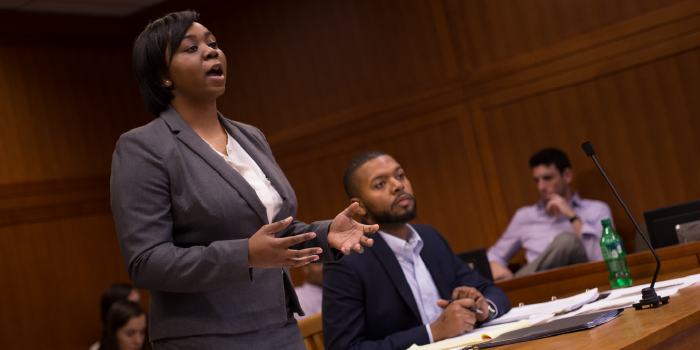 A collegially competitive spirit thrives among Wake Forest Law students. You may hear it most loudly when it comes to oral advocacy.

When many people think of a lawyer, they envision a trial lawyer. They dream of the heroes and heroines of the court that have been made famous by literature and film and popular television. They imagine the way a trial lawyer moves the court through physical expression, and, in an almost theatrical way, stirs emotion and thought with both argument and ritual.

They also think of the courtroom and the way the judge is often elevated to preside over it, or the way it is engineered into subtle spaces that distinctly separate the judge from the jury and the jury from both plaintiff and the defendant. In this way, the courtroom becomes a symbolic space that requires the trial lawyer to tactfully navigate the science of the courtroom with a certain artistry, to compel an ambivalent, biased, or otherwise indifferent audience to accept or feel an idea despite the rigid etiquette of the courtroom.

Within this imagined space is the reality that trial advocacy students at Wake Forest Law are proving mastery over this ceremony. In just two years, the Wake Forest American Association for Justice (AAJ) and National Trial teams have collectively contributed three championships to the law school’s “quadfecta” of back-to-back national titles between 2017 and 2018.

The first place finish at the 2017 AAJ National Trial Competition and the unprecedented first and second place finish at the 2018 Texas Young Lawyers Association (TYLA) National Trial Competition caused Wake Forest to soar among the rankings. As one of the top teams in the country, Wake Forest was invited to the 2018 National Board of Trial Advocacy (NBTA) Tournament of Champions (TOC), where they earned a first place finish — a first in school history.

But beyond the trophies and the personal achievements is the question of how we got here — how has Wake Forest continued to foster a competitive trial advocacy program for over 40 years?

It began with the launch of the Student Trial Bar in the fall of 1978. Inspired by the increasing need and desire for competitive litigation practice, the Student Trial Bar sent Wake Forest’s first competitive team to the regional tournament of the 1979 TYLA National Trial Competition. Under the leadership of Professors Corbett, Billings, and Taylor, Wake Forest had already made three consecutive appearances at the TYLA’s national tournament by 1983. In just 10 years, Wake Forest had developed a top 12 trial advocacy program, a ranking that was validated with a second-place finish at the first-ever Tournament of Champions (TOC) in 1989.

As the trial advocacy team continued its rise in the rankings during the 1990s, so too did the recognition that Wake Forest was educating many of the country’s finest trial lawyers.

“I have often heard sportscasters repeat the phrase that ‘Miami of Ohio is the cradle of great football coaches,’” said former Dean Bob Walsh in a 1996 publication of The Jurist, “In a similar vein, Wake Forest University School of Law could well be called ‘the cradle of great trial lawyers.’”

With the continued expansion of the trial advocacy curriculum, an endeavor led by award-winning Professor and Trial Advocacy Program Director, Carol Anderson, Wake Forest established the foundation that made the success of today’s trial teams possible.

Combining this history with an enduring emphasis on professionalism and integrity — with a true understanding and care for the human impact of trial advocacy and the law — is what makes a Wake Forest trial lawyer so distinctive, according to Mark Boynton (JD ’97), coach of the 2018 championship-winning National Trial teams.

“Authenticity is bred here,” says Boynton, “It’s bred here because we are small and we are led by people with integrity and a high commitment to professionalism and authenticity. It permeates the curriculum. If you have a culture of caring and integrity, it attracts people that value those same things.”

Wake Forest is proving why this matters in a courtroom—one individual award and championship at a time.

“Human beings and juries in particular respond to authenticity,” Boynton adds. “They respond to credibility and credibility comes from authenticity. When we’re teaching young trial lawyers, we teach the science and art of the courtroom, but we also have to teach them to be authentic storytellers. You have to make your audience, your jurors, understand your story, but also make them feel something from your story, and, most importantly, make them want to take action.”

The numerous, highly decorated student trial advocates that continue to graduate from Wake Forest Law are proof that this approach is a successful one. Based on Wake Forest’s belief of what a trial lawyer is—an authentic figure with a deep care and commitment to professionalism and integrity—it makes sense that Wake Forest trial advocates are so successful in the courtroom. With a legal education that is heavily focused on community and service, Wake Forest students are intentionally developed to carry these values into the competition and into their own careers long after they graduate.