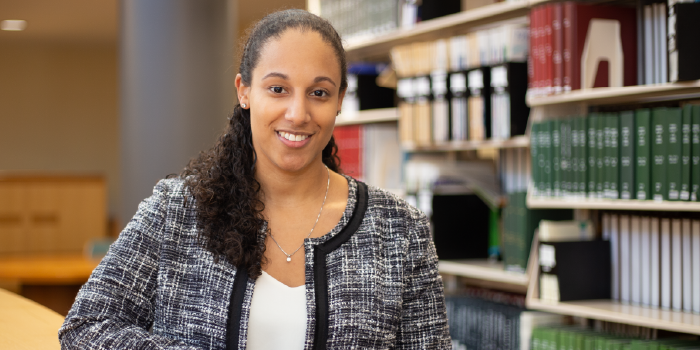 Sophie Robart (JD ’20) interned with the U.S. Attorney’s Office for the District of Massachusetts in the Economic Crimes Unit and the Department of Justice’s (DOJ) Child Exploitation and Obscenity Section (CEOS) in Washington D.C. Both of these experiences reinforced her passion for criminal law.

Where do you call home?

Where did you study for your undergraduate degree?

In the summer after my 1L year, I worked in the U.S. Attorney’s Office for the District of Massachusetts in Boston, Mass. Specifically, I worked in the Economic Crimes Unit, where I was lucky enough to work on the College Admission Scandal case, where 51 indictments were filed in March 2019.

In the summer after my 2L year, I worked in the Department of Justice’s (DOJ) Child Exploitation and Obscenity Section (CEOS) in Washington D.C. I worked on cases of extraterritorial child sexual exploitation, production and distribution of child pornography, and obscenity. This is the work that I hope to do in the long term.

During my 2L spring and 3L fall, I have been a part of the Innocence and Justice Clinic. This was absolutely the best part of law school — it allowed me to use what I learned in the classroom in the real world.

Why did you decide to attend Wake Forest Law?

I wanted to attend school in a new location. On the revisit day, I loved the small school atmosphere and made my decision then!

The community is very small in the best way possible. You can walk around the school and know the faces you pass, regardless of whether or not you’ve had a class with them. As you walk around, people will always smile and say hello. That might seem like a small thing, but if you’re having a bad day or are just feeling more stressed than usual, to have someone say hello and smile is comforting.

My small section from 1L year was a comforting way to start law school. I knew that we were all in the same boat and that we could lean on one another. That hasn’t changed, even 2 years later. Although we aren’t all in the same classes any longer, we are always looking out for each other. I know that if I really needed something, I could call someone from my small section and they would be there for me.

What do you wish you’d known during your 1L year?

I wish I’d known that it isn’t all about grades. Law school is inherently competitive considering the school ranks you against each other, but your rank isn’t everything.

What are you involved in outside the classroom (i.e. student organizations, pro bono project, intramural sports, etc.)?

I am vice president of the Domestic Violence Awareness Coalition (DVAC). This is a great opportunity to work with the local Winston-Salem community, especially the local domestic violence shelter. I am also an editorial staff member of Wake Forest’s Journal of Law & Policy.

I am also a co-president of If/When/How: Lawyering for Reproductive Justice, a national organization, which helps law students who are interested in reproductive justice, ranging from welfare caps to abortion access, organize events to pursue those objectives. Lastly, I am a Pro Bono Project coordinator for the Prison Letters Project, which is one of the only free, law-student run, legal research sources for inmates in prisons and jails across the nation.

What do you do for fun in Winston-Salem when you aren’t studying?

I adopted a puppy during 2L fall (the most stressful time of my life), so we spend a lot of time at dog parks and on hiking trails.

Where do you want your law degree to take you?

I hope to one day be back in the DOJ’s CEOS office prosecuting child sex crimes.