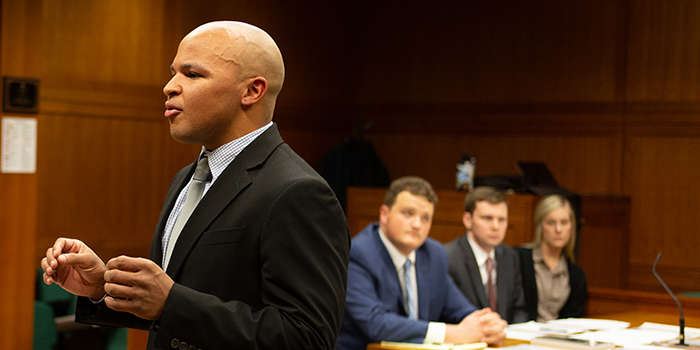 “Our law students have a well-established reputation for trial advocacy,” said Jane Aiken, dean of Wake Forest School of Law. “Their judgment, integrity, creativity, and narrative skills may be developed in the classroom, but the hours of hands-on experience practicing and honing their communications abilities sets them apart in competition.”

“These students fought on their ground and tried their cases not only with ferocious advocacy but with Wake Forest’s hallmark professionalism and congeniality,” said Mark Boynton (JD ’97), who serves as trial team coach. “They honored and demonstrated the School of Law’s tradition of excellence in all facets of trial advocacy. Fellow coach Sonny Haynes and I could not be more proud of these students.”

The squad of second-year students, which included Dani Kunkel (JD ’21), Dakota Baccus (JD ’21), and Amanda Manzano (JD ’21), did not lose a single ballot and swept every round to the finals, according to Boynton. They ultimately toppled the University of South Carolina, last year’s regional champions, in a 3-2 victory. Boynton noted that this team defeated the same Gamecock squad that knocked Wake Forest out of the regional competition the previous year.

Since 2017, Wake Forest School of Law has brought home four national championships, making it the only law school to win the AAJ Student Trial Advocacy Competition, the National Moot Court Competition, the American College of Trial Lawyers National Competition, and the Tournament of Champions in consecutive years.

The TYLA National Trial Competition began in 1975 to strengthen student’s advocacy skills through competition and networking with members of the bench and bar. The national championship team’s school receives $10,000 and commemorative plaques for each team member.

About Wake Forest School of Law:

For more than 125 years, Wake Forest School of Law has developed skillful advocates who bring the legal profession and modern workplace a robust expertise that can only flourish in an educational setting that is small by design and nurtured by dedicated teacher-scholars. Our traditions — guided by values rooted in community, service, and collegiality — uniquely develop citizen lawyers and professionals who are able to persevere, empathize, assess, and creatively adapt to the ever-changing needs of clients and the rule of law. Located in Winston-Salem, N.C., Wake Forest Law offers these degrees: the Juris Doctor (JD) with dual and concurrent degree options, a Master of Laws (LLM), the Doctor of Juridical Science (SJD), and an online Master of Studies in Law (MSL). Learn more about Wake Forest School of Law at law.wfu.edu.