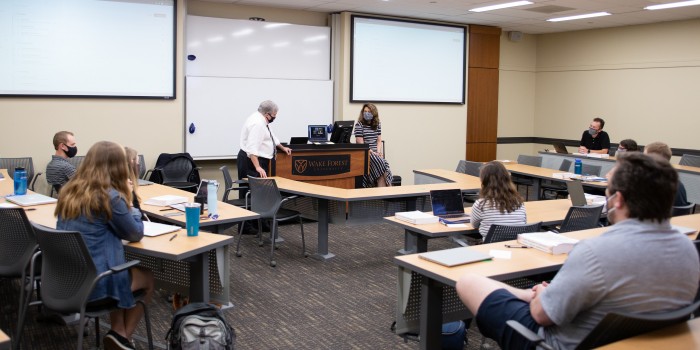 Students in Wake Forest Law’s State and Local Government in a Federal System class face a 20-page paper at the end of the fall semester. But thanks to generous donors, one student will take home the Kay Hagan Award and an honorarium for the best paper in the class.

“We are so pleased to accept the award on behalf of Wake Forest Law,” said Dean Jane Aiken. “Highlighting the best paper in the class in the name of our distinguished alumna will be a distinctive tribute.”

The award honors the late U.S. Senator Kay Hagan (JD ’78), who passed away in October 2019. Dean Aiken and Adjunct Professor of Law Don Vaughan (JD ’79) who teaches the class were joined by two special guests to make the announcement. Brad Wilson (JD’78), an executive in residence at Wake Forest Law was Hagan’s classmate. Her husband, Chip Hagan (JD ’77) said he and his family were honored to accept the award as he addressed the class via video chat.

“On behalf of my wife, I want to make this your first call to service,” Chip Hagan said. “There are so many opportunities for people to serve in local, state, and national positions. I urge all of you to give that serious consideration.”

Wilson, the former CEO of Blue Cross Blue Shield of North Carolina, shared memories of attending Wake Forest Law with Hagan, who impressed him with her energy and enthusiasm both in class and after graduation.

“Kay Hagan was active in local, state, and federal government, the topic taught in this class,” Wilson said. “She was a great public servant and a wonderful lawyer.”

Kay Hagan met her husband Chip at Wake Forest Law and worked as an attorney after her graduation. Hagan served 16 years as a lawmaker in Raleigh, N.C. and Washington, D.C. She served one term in Congress, defeating Elizabeth Dole to win the Senate seat.

Democratic Gov. Roy Cooper called Hagan “a fierce advocate for North Carolina” who “represented our state with courage and grace her entire career.”

“Kay was one of the people who was most interested in trying to reach across the aisle both in state and federal government,” Hagan said. “I encourage you to look around your fellow students and classmates and find good friends and work together.”

A committee will review the final papers and award the honor at the end of the fall semester.