The guardian of Worrell Professional Center 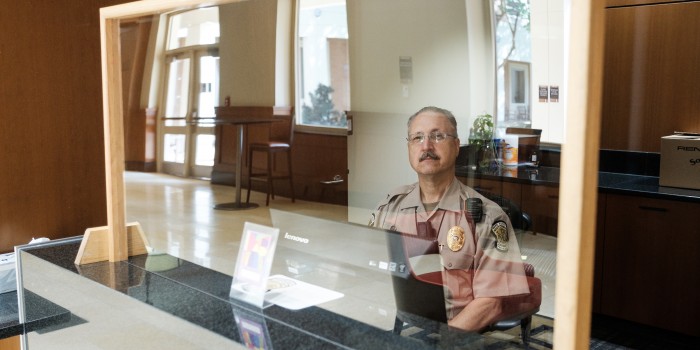 When the pandemic sent the Wake Forest Law community home over spring break and then the rest of the semester, one member of our group stayed behind.

Dividing his time between providing security in the gatehouse, and doing the rounds of Worrell Professional Center, Officer Long became the building’s guardian.

“Officer John Long made the transition as seamless as possible for everyone at Wake Forest Law,” said Dean Jane Aiken. “Thanks to his efforts, everyone remained safe both physically and with social distancing in mind.”

Throughout the spring and summer, Officer Long became the point person for Wake Forest Law.  In addition to his regular security checks, he helped streamline mail service pickups by key staff and faculty members, ensuring that designated employees could access what was needed from the building to keep the programs running.

“It’s been kind of like a ghost town here,” Long said.

When the plan was developed for students, faculty, and staff to pick up belongings from Wake Forest Law, Long took the extra step to confirm the arrivals with the security officer at the gate to campus. No task was too big or too small. He even watered the many, many plants.

“I take pride in considering what your needs are as you approach me and trying to make sure that your needs are met and that you leave with complete satisfaction,” Long said. “So as I realized that this wasn’t being done or that wasn’t being done, I thought ‘well, there’s nobody doing it, so I’ll do it.’ To do this job as it’s supposed to be done, you have to have a servant’s heart.”

Long’s servant heart has been at Wake Forest for about two and a half years, starting at LJVM Coliseum after 30 years in law enforcement with the Stokes County and Forsyth County Sheriff’s Departments. He transferred to Wake Forest Law, originally on a traditional day shift. With students studying late in Worrell, he willingly changed his hours to afternoon and evenings to provide more even security. Now he’s looking forward to campus reopening for the fall semester.

“When people show up it’s so really, really good to see them,” Long said. “We’re all kind of like a family. That’s how I feel, anyway.”