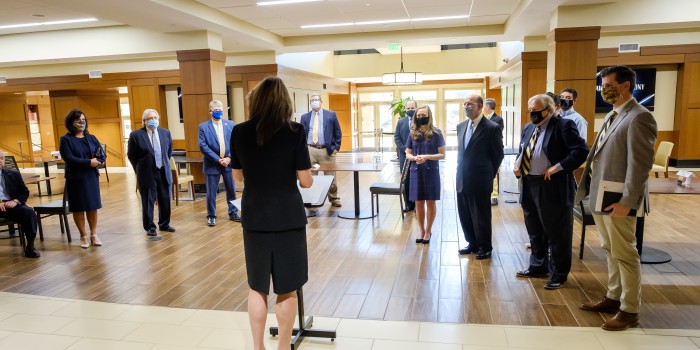 “Kay Hagan is a model of what we would hope would happen with Wake Forest Law students,” said Wake Forest Law Dean Jane Aiken during the award ceremony. “If you look at all of the things she did, this is a woman who was courageous and took strong positions on issues — and that’s important.”

Sen. Hagan, a Wake Forest Law alumna, served for a decade in the North Carolina General Assembly as a senator representing Guilford County before being elected to one term in Congress as the state’s first Democractic female senator.

During the ceremony, Sen. Hagan’s husband, Chip Hagan (JD ’77), described his wife’s passion for service at both the state and federal level.

“She was very interested in trying to do things to make our state a better place to be,” said Hagan. “For us to be able to recognize the people that do well in state and local government, and recognize the importance of it, and to have Kay be a part of honoring that is to me exactly what she would have wanted.”

Batchelor is the first recipient of the award, which will be given annually to the best student in the law school’s State and Local Government course taught by Adjunct Professor Don Vaughan (JD ’79).

Vaughan is a former North Carolina state senator who was elected to fill Sen. Hagan’s seat when she became the state’s U.S. senator. He also served seven terms as a member of the Greensboro City Council.

Batchelor’s final paper for the course — “The Echo of Silent Sam: How the Fall of UNC’s Notorious Confederate Monument Illustrates Complex Questions of Authority in North Carolina State and Local Government” — led to her selection for the award.

“I attended UNC-Chapel Hill for undergrad, so I enjoyed examining the various government actors involved in the Silent Sam controversy through a legal lens,” said Batchelor. “Furthermore, as a native North Carolinian and a law student pursuing a public interest career, it is particularly meaningful to receive an award that honors a woman who dedicated her life to serving this state and its citizens.”

During her time at Wake Forest Law, Batchelor has also been managing editor of the Wake Forest Law Review and executive director of the Public Interest Law Organization. In August, she will begin clerking for Judge Darren Jackson on the North Carolina Court of Appeals.

All five members of the selection committee have been lecturers in the course over the past seven years, bringing real-world experiences into the classroom for Wake Forest Law students.

Category: Our Announcements, Our People