Wake Forest Law alumnus Stephen Hawthornthwaite is shaping the future of sustainable fashion, one plastic bottle at a time 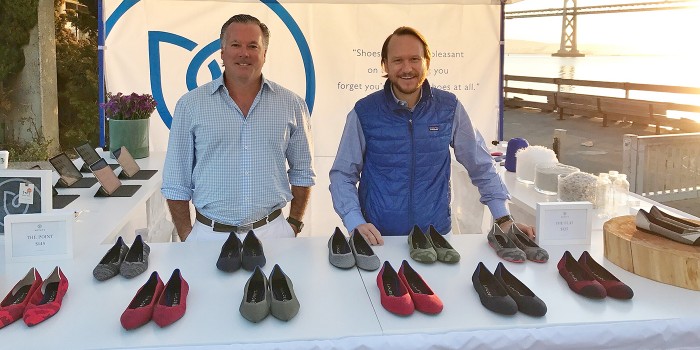 Stephen Hawthornthwaite (left), the co-founder, CEO, and chairman of Rothy’s, showcases the company's line of shoes at a farmers market pop-up. (Photo courtesy of Rothy's)

From an early age, Stephen Hawthornthwaite (JD ’96) was sure of three things: he wanted to start a successful company, do the right thing, and give back to society. What he didn’t anticipate however was that at the age of 41, he’d embark on a multi-year journey to launch what Forbes has called one of the next billion-dollar-startups — which is not only profitable, but is also actively shaping the future of sustainability in the fashion industry.

Hawthornthwaite, a Wake Forest Law alumnus, is the co-founder, CEO, and chairman of Rothy’s, a sustainable lifestyle brand transforming recycled materials into timeless shoes, handbags, and accessories with nearly no waste. Since launching in 2016, Rothy’s has diverted millions of plastic water bottles from landfills and over 200,000 pounds of marine plastic from oceans — 3D knitting recycled plastics into comfortable, stylish essentials.

The idea for Rothy’s — the name of which is a combination of Hawthornthwaite’s nickname, “Hawthy,” and the name of his co-founder, Roth Martin — was borne out of the co-founders’ desire to start a company that would solve a complex problem and their recognition that the increasing “casualization” of fashion was a trend that was here to stay.

“We had a shared vision around a great product that could be for everybody,” said Hawthornthwaite. “The original concept was to create a front-of-the-closet shoe that was an easy choice that a woman could wear first thing in the morning, into the evening, and carry her throughout her day.”

But the pair also knew they had to innovate.

“We didn’t want to be just the thousandth manufacturer of women’s flats,” he said.

And innovate they did, though in the face of one major challenge: neither co-founder had any experience in the footwear industry. But that, Hawthornthwaite says, is one area where his experiences at Wake Forest Law helped him find solutions.

Learning to distill and synthesize volumes of information into a simple, compelling argument prepared him for the work he would do to understand the landscape in both the footwear and knitting industries, and to chart a clear path forward for Rothy’s.

“There’s not a day that goes by in my current role that I’m not thankful to have a law degree,” he said. “I’m right where I wanted to be, which is I know the right questions to ask, and I know when to get an attorney involved.”

As he learned more about the footwear industry, Hawthornthwaite was struck by how much waste was produced in the typical manufacturing process, where material is traditionally die-cut into pieces that are then stitched together, resulting in excess material that isn’t put to use.

The 3D-knitting technology that Rothy’s developed and uses in its factories allows the company to seamlessly knit the upper portion of each of its shoes as a single piece, eliminating much of the waste created in a more typical footwear production process.

Hawthornthwaite had also observed that sustainable products of the past were often lower-quality or less fashionable. With that in mind, he believed that solving for those two drawbacks alone would engage more people in making sustainable purchases, whether that was their primary intent or not.

“If we make a great product that’s beautiful and comfortable, there are going to be people who really don’t care about sustainability, but they’re going to buy it because it’s beautiful and comfortable,” said Hawthornthwaite. “If you can deliver a great product that’s compelling without asking the customer to really sacrifice something in the process, then you’re driving change.”

Part of the company’s ability to produce such a product in a way that also aligned with its environmentally conscious mission hinged on Rothy’s having its own factory in Dongguan, China.

“To really execute on sustainability, to really be sustainable through and through, by definition you have to own your factory,” Hawthornthwaite said. “We built from the ground up with that in mind, and when you own your own factory, you’re really controlling the process. You’re controlling the waste. We know how our people are treated.”

Navigating the challenges of establishing the Rothy’s factory, and the company more broadly, was another area where Hawthornthwaite points to his legal education as particularly influential — especially what he learned in courses like tax law, corporate law, and real estate law.

“To anyone who is thinking about doing something else with their law school career, absolutely consider it,” said Hawthornthwaite. “A law degree is invaluable in any number of industries.”

What began as a women’s footwear company has now evolved into a brand that also produces handbags, accessories, and most recently, a line of men’s footwear launched in May 2021. As it has grown, Rothy’s has made great strides in sustainability, and the company’s mission to continuously do better for people and the planet has led it to set its sights on something even more ambitious: closing its loop through circular production, which it hopes to achieve by 2023.

“So many of the products that are produced don’t really have an end-of-life strategy. Because we own our factory, we can design for end-of-life. Our most complex shoe probably has seven [materials] total, and that enables us to start to recycle shoes, and then reuse that material in the production of new shoes and be fully circular,” said Hawthornthwaite.

It’s a vision that aligns with Hawthornthwaite’s fundamental belief “that people are good and that they want to do good things for society” — a belief that’s reflective of the pro humanitate spirit of Wake Forest Law graduates.

Listen to Wake Forest Law’s conversation with Stephen Hawthornthwaite on The Legal Deac podcast, where he talks further with Professor John Knox and Executive Director of Marketing Jorge Reyna.

The mission of Wake Forest Law is to advance the cause of justice by creating knowledge and educating students to meet the legal needs of the world with confidence, character, and creativity. We instill in students a respect for the law, a devotion to the ideal of service, and a commitment to professional values. We educate students from around the world in a richly diverse, equitable, and inclusive community. Learn more at law.wfu.edu, and stay up to date on what’s happening in the Wake Forest Law community by following us on Twitter, Instagram, and Facebook.