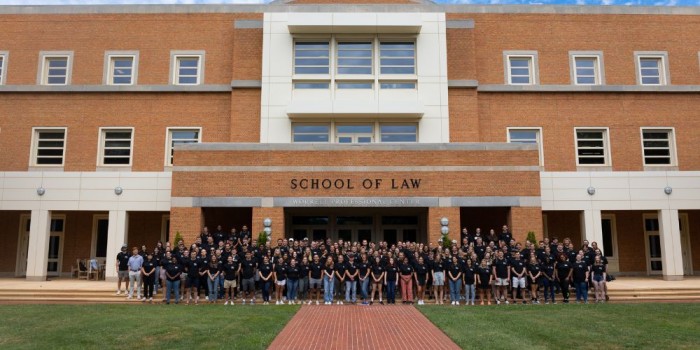 On Monday, August 15, the Class of 2025 entered Worrell Professional Center as the newest members of the Wake Forest Law community. Excited to embark on their legal journey, the students filled the law school’s auditorium to officially kick off Foundations Week. Interim Assistant Dean of Student Affairs & Executive Strategy Branden Nicholson was able to welcome the students.

The Class of 2025 is composed of 159 students from 100 different undergraduate institutions across 32 states. The class enters the law school with a median 165 LSAT score. In addition to setting the record for the highest median LSAT score, the Class of 2025 has the second-highest GPA median of 3.72. These statistics are preliminary until official reporting concludes on October 5 of this year.

“Despite the 12% national decline in applications this cycle, I am pleased that we enrolled 159 students with exemplary  academic credentials,” says Evan Didier, the Assistant Dean of Admissions & Financial Aid, “Combined with the extensive breadth and diversity of their backgrounds and experiences, our J.D. Class of 2025 arrives well-equipped to not only take on the academic rigors of the classroom, but to grow into future attorneys who reflect the ideals of leadership, character, and Pro Humanitate.”

Though a record-breaking class already, the Class of 2025 is joining the law school after a year of high achievement. Wake Forest Law ranked No. 37 in the U.S. News & World Report’s national rankings in March of this year. In April, Wake Forest Law ranked 3rd out of 196 law schools in the number of 2021 graduates employed in full-time, bar passage required and J.D. degree preferred jobs. The 2021-2022 fiscal year also marked the most  significant fundraising year in the school’s history, which will help ensure the success of current and future Wake Forest Law students.

The Class of 2025 concluded their Foundations Week with a Day of Service, during which the students visited Habitat for Humanity build sites, the Forsyth Country Sheriff’s Office, the Second Harvest Food Bank and more.

Class of 2025 – Day of Service from Law Communications on Vimeo.