Professor Michael D. Green, 2012 winner of the John G. Fleming Memorial Prize for Torts Scholarship, delivered the Second Fleming Lecture at Berkeley Law with co-winner William Powers, Jr. of the University of Texas on Monday, Nov. 5. Upon acceptance of the prize, both men presented a lecture entitled “Restating Torts”, largely centered around their outstanding co-report on two core portions of the new Restatement (Third) of Torts, “Restatement Third, Torts: Liability for Physical and Emotional Harm“, for which, among other accomplishments, they were being honored.

END_OF_DOCUMENT_TOKEN_TO_BE_REPLACED 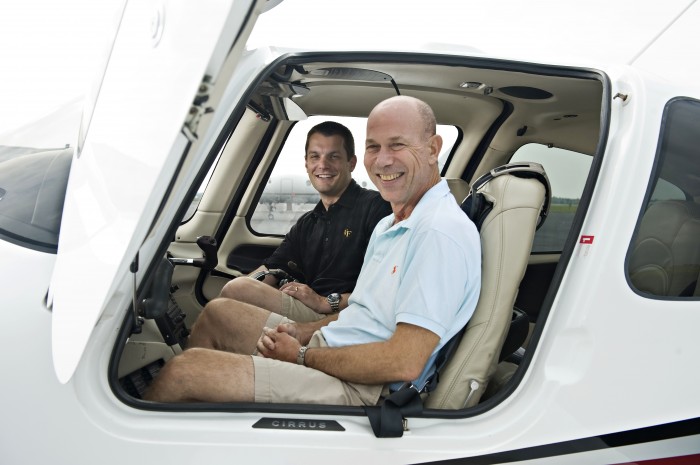 In legal circles, Wake Forest Law Professor Michael Green is known as one of the country’s most respected experts in the area of tort law.

As the Bess and Walter Williams Distinguished Chair, Green currently serves as a Co-Reporter for the Restatement (Third) of Torts: Liability for Physical Harm, a publication of the prestigious American Law Institute. He is a co-author of one of the best selling Torts casebooks and has authored four other books and dozens of articles and chapters in books. He is a co-author of the Reference Guide on Epidemiology in the National Academy of Sciences and the Federal Judicial Center’s Reference Manual on Scientific Evidence, which serves as a reference on scientific disciplines for federal and state court judges.

What some may be surprised to learn is that Green is an angel. Literally. A private pilot, Green volunteers for an organization called Angel Flight.

This summer, one of Green’s passengers was a young man with cerebral palsy who is wheelchair bound and who needed a lift home after visiting Camp Victory Junction, located south of Greensboro.

“He was a 12-year old who was here for a week for Camp Victory Junction, and I was flying him back to his home in South Carolina,” Green explained. “ I’ve done a number of those routes.”

In his spare time, he flies with Matthew Phillips (’06) and his colleague, Professor Mark Hall, who just earned his private pilot’s license. “Once, Matthew and I both picked up a young girl in Tennessee and then flew her to Greensboro to a week-long camp on the front-end,” Green said.

Phillips was having dinner at Green’s home during Phillips’s third year of law school when he expressed an interest in learning how to fly, Green said. “I said well if you do it, then let me know. It was one of those things where as an old wizened pilot you say, oh I’ll help you. Like teaching, you know, you want to pass along the knowledge you’ve gained, and pilots love to talk flying. So I talked with him a lot as he was going through the pilot training and he’s become a great pilot. He’s very meticulous, and I learn things from him, as it should be, you should take things from your students.”

In addition to the cost of using the plane he co-owns, Green donates the gasoline and, of course, his time when he makes these Angel Flights. “There are very few charities I support that I get personal pleasure from doing as I do with flying for Angel Flight,” he said.

Because of his busy academic schedule and the weight constraints of his plane, a 4-seat Cirrus, Green doesn’t get to make as many Angel Flights as he would like. “When I can fly, I’m there,” he said.

In addition to the Angel Flights, each year Green donates a flight and dinner to Charleston, S.C., to help raise money for the Public Interest Law Organization auction.

Green and his wife, Carol, have two sons and a daughter. But Carol doesn’t fly with her husband. Never has, never will.

“ I’ve been flying for 18 years and she’s never been up with me,” he said. “My kids have, but she doesn’t  She didn’t want to fly initially because she didn’t want her children to be orphans, and now I think she just doesn’t like the idea of it. And she has stuck to it. I have to give her credit.”

Green added that he thinks the law school needs to have its own airplane. “I’d like to apply for the job of Law School pilot,” he said with a laugh. “I contemplate getting to an age where it may be time to hang up the license, but I am certainly not ready to do that now.”

Green will soon be flying across the country, this time commercially, to accept the John G. Fleming Memorial Prize for Torts Scholarship. He, along with co-winner University of Texas President and Law Professor William C. Powers Jr., will jointly deliver the Second Fleming Lecture at Berkeley Law on Nov. 5. Green and Powers are being honored, among other things, for their outstanding work as American Law Institute co-reporters for two core portions of the new Restatement (Third) of Torts. As co-reporters, they produced both the Restatement (Third) of Torts: Liability for Physical and Emotional Harm (2005 & 2012) and Apportionment of Liability (2000).

In his generation, Berkeley Law Professor John Fleming was the world’s leading comparative law tort scholar and long-time editor-in-chief of the American Journal of Comparative Law. In 1998 when he died, two books were published in his honor and proceeds were used to create the Fleming Prize, to be awarded every other year to a torts scholar from any country.

Green says the award is one of two torts awards that holds the most significance internationally.

“I don’t know all of the international people who have won it, but if you look at the two Americans, it’s Bob Rabin, who is the premiere torts academic in this country, and Guido Calebresi, who was celebrated for his work on law and economics, was a professor and Dean at Yale, and now is a judge on the Second Circuit Court of Appeals. So I don’t belong in that group, honestly, and I am not being falsely modest, but it’s nice to be a part of it.”

“I am very pleased and I am very honored,” he said. “It’s a very nice thing. I am lucky to be at Wake Forest. It gives me the opportunity to do all of these things.”